Since yesterday, Dave Lewis, Chief Executive at Tesco, has been in the firing line. He is new to the role and battling against a crisis that, whilst not of his making, puts him centre stage. Yet a search on the networks shows that Mr Lewis has no social presence. He is off the grid when it comes to the conversation. And there is plenty of chatter:

Why should this matter?

I was speaking at a Westminster Briefing conference last week, joined by seasoned corporate communications folk, talking about exactly this kind of crisis scenario. All were agreed that the CEO is the guardian of company reputation; and never more so in the digital world. It is the CEO’s job to be visible, engaged and in the heart of their market place. And it was unanimous – social media was part of the chief executive’s remit. There are three reasons why:

According to a study by BrandFog, 71% of UK respondents in a survey this year state that CEO engagement on social media helps to communicate company values and shapes a company’s brand reputation.  A socially active C-suite builds relationships. Developing transparency, personality and opening channels that in times of crisis bring influencers, advocates and stakeholders alongside.

But more importantly being active in social media, gives the leadership a voice.  An opportunity to share vision, culture and set the tone of the organisation. And whether things are good or bad, the senior team can amplify the message across all its stakeholders. In fact 68% of UK BrandFog respondents believe that social media is a powerful tool for building thought leadership and enhancing the credibility of C-suite executives with stakeholders.

And at times of crisis there is no more important stakeholder than the journalist (well apart from shareholders). Among UK journalists surveyed by Cision, 57% said they turn to blogs for story research and 75% to microblogging services such as Twitter. A presence by the CEO on the popular networks can make a difference to engagement with the press.

2. Embed your CEO in the industry

Being active in social is much more than a chance to broadcast CEO opinions; it is an opportunity to interact with the industry. For Tesco’s Lewis, it is a chance to engage, beyond the city, and debate with suppliers – farmers are pretty vocal on social media too!

Outside of a crisis the social conversation can lead to innovation. The exchange of ideas and a finger on the pulse of industry sentiment. Listening, debating, sharing and collaborating; the social CEO becomes the heart of the industry. Richard Branson is lauded for innovation. He is also the top social CEO according to LinkedIn. Take a peek at his blog, to see how he opens discussions, shares insight and draws inspiration for innovation. 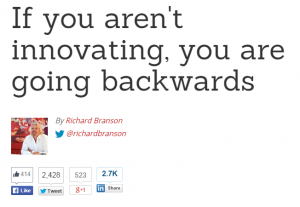 3. CEOs must lead from the social front

As employees we want our leaders to be visible. A study by LinkedIn reveals that 76% of executives say they would rather work for a social CEO. Company staff want transparency. They want access. They want to feel proud of their leadership team.

The social CEO can meet employees where they are spending time. They can tell the company story, and better still, directly engage with employees. Social enables CEOs to digitally walk the shop floor, nod at co-workers and engage in the culture as part of a united team. Right now Dave Lewis needs to rally his company. Social could have helped him do that a wee bit faster and with more credibility that any edict from on high.

Although Lewis is not apparently active on social, he is not alone. According to research from CEO.com  68% of CEOs have no social media presence at all. My advice: don’t wait until a crisis to engage. Get social now and lay the foundations to mitigate the risks and benefit from better communications across your stakeholders.

What if your organisation was facing a social media crisis? Join Katy Howell for our upcoming webinar on Tuesday 14th October when she will share insights from the Westminster Briefing Crisis Communications Conference.