Anyone who’s seen Peanuts knows the football gag. In it, Lucy challenges Charlie Brown to kick a football which she then moves just as he’s about to punt the life out if it.

The joke ran yearly from 1951 to 1983 and yet every time Charlie B somehow convinced himself that THIS TIME it was going to be different.

I feel the same way when I read reports about the challenges faced by social media.

Every time I go in hopeful that maybe this time some new challenges will be thrown into the mix. Or at the very least, the percentage split between the usual suspects will have changed.

The “2016 State of Social Marketing” report by Simply Measured is a case in point.

This is not to take anything away from the report itself – it is a well-researched, written and presented account of both the state of social media organisations and the top nine social channels.

To quote the report:
“Measuring ROI is a massive problem: 61.1% of marketers identified “Measuring ROI” as their top challenge, and only 9.4% said that they’re able to quantify revenue driven by social.”
Aaahhh, good ‘ol ROI. The three letters that have plagued social marketing since day 0. Dig a little deeper into the report and the reasons for this become all too apparent. 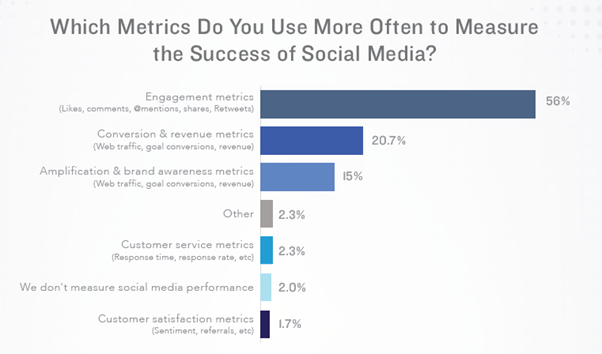 Purely using engagement to measure the success of social media is like deciding that instead of judging the winner of a rugby game according to the scoreboard, we’re going to base it on which team made the crowd cheer the loudest.

And that number is sitting at fifty-eight-frikkin-percent with “conversion and revenue metrics”, the metric that actually makes a difference to a business’s bottom line, limping in at a pitiable 20%.

I love this next part:

Only 20.7% of marketers said conversion and revenue metrics were a focus. This is a major source of the disconnect between social media and other marketing channels.

In plain English – other marketing channels are judged by how much actual money they are bringing into the business. Huh. Fancy that…

In social’s defence though, it would seem that there are other forces at play here:

Considering the fact that, according to the report, 68% of social media teams have between 1 and 2 people, it’s no wonder that human resources are in high demand, but take a look at the “analytics software” part of the doughnut.

Not having the right analytics in place and measuring things like engagement instead of conversion and revenue could explain why ROI remains such a big problem.

Bad news for some. But, having cut our teeth in B2B social over a decade ago, we had to learn how to prove our worth to clients who, to put it mildly, were skeptical about what value social could bring to their business.

Here are three tips we picked up along the way that might help you to eat the ROI elephant in the room:

We’ve come a long way since social media marketing first emerged as a category, but until we can prove real business value, we still have a long way to go.

Asking the right questions and employing a data-driven approach to every aspect of what we do will get us there and hopefully eliminate the “Charlie Brown” effect of reading reports about the current state of social.

Simply Measured’s 2016 State of Social Marketing report is available freely for download (behind a form-fill of course!) from here. (https://simplymeasured.com/2016-state-of-social-marketing-survey/)