“What’s Twitter saying?” “What’s the hashtag?” So entwined is social to our world, that to get the latest news we often go there first – but are we right to look to Twitter and other social networks to gauge wider public opinion?

A study in 2013 by Pew Research showed that whilst Twitter did display conservative tones and neutral conversations, it was often concentrated negativity that stood out most. The same study found that Twitter reactions, did not match public opinion. But has this changed at all over the last couple of years as Twitter has become more ‘mainstream’?

Let’s take a look at the recent UK General Election. The Conservatives were elected to form a majority government, but was this same pro-Tory sentiment matched on social? Throughout the election campaign, the opinion polls were saying it was going to be a hung parliament – but did social get it right in the end?

During one of the TV debates, it seemed that the SNP took the swing on positivity and took the lead with the number of mentions. 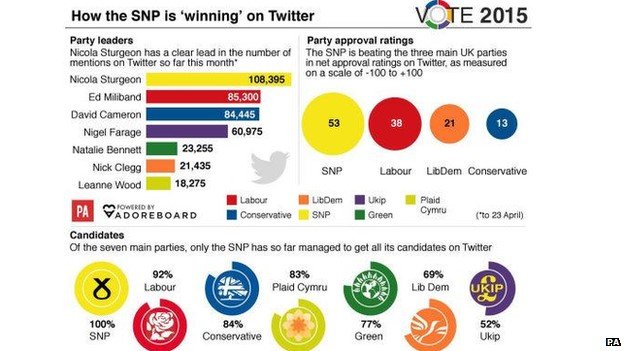 And considering sentiment and if follows were seats, Labour were in the front running.

But as we know Labour didn’t win, so how accurate is Twitter at portraying the views of a wider nation? And for us Twitter users, is it arrogant of us to forgo the views of the wider world and those of people who don’t use social in our analysis? Probably yes.

Behaviour is an important factor to consider if you are looking to social media platforms to measure opinion. Looking at how social platforms are used and the behaviour of individuals on them, Twitter especially is often used to vent instant reactions and our first initial thoughts around subjects, so perhaps this accounts for some of the disjoint between Twitter and ‘real life’. People may offer an instant reaction, but then faced by the calm cold logic at the ballot box may reason differently and vote differently.

Where I think social did play the right and relevant part, was through the encouragement of getting people into the polling stations and out to vote. The participation was about 66%, slightly up from the 2010 General Election. Although it is still down from the area of 71-74% seen at national polls in the 1980s, many electors have become disillusioned with politics following various parliamentary expenses scandals and MP pay rises in the past few years. So it is rather a victory to see voters returning. And with our democratic government in place, and Twitter being a platform that enables people to have their say and voice their opinions, isn’t that what it is all about?