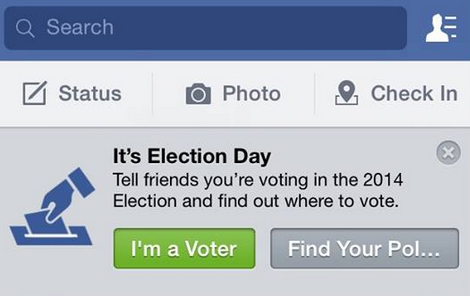 As we come to round off a season of Indian, Columbia and, more closer to home, European elections, it’s clear that more of us are turning to digital channels not only to champion our political opinions but at the very least inspire action. With many warning against wasting your vote, if even voting at all.

In a move previously introduced during the US 2012 presidential elections, Facebook decided to add a ‘I’m a voter’ button. The response clocked up an impressive 9 million Facebook users happy to state their act of democracy and Facebook chose to bring back the button last week. The move has seen 4 million Indian voters earlier in the week press the button in support of their parliamentary elections with more response expected across the globe including the referendum on Scottish independence and major elections in South Korea, new Zealand and Brasil.

Is this simply a new form of ‘hashtag activism’ where citizens are able to exercise democratic narcissism or does the action have a real influence on encouraging inactive voters to the ballot? In a study carried out during the 2010 US, mid-term elections claimed some 340,000 extra votes were cast as a direct result of the ‘I’m a voter’ button, highlighted here by the guardian.

It shows a significance in getting people to vote but does the action pave the way for what could eventually become a digital vote? Or is this simply another move to solidify Facebook as the leading social platform reinforcing its relevance in modern society?

As Facebook roll out their new ‘ask’ feature encouraging users to query each other over a number of personal details including details of marital status like ‘why are you still single?’, it’s clear that the platform will not be shrewd in introducing functions that incite response.