It’s clear that we are in an age where a trend will start from someone or a small community, it then gets shared online and before you know it, it is shared over social reaching millions of people who are then altering their lifestyle to this trend. This is what I have seen previously with Marie Kondo and the urge to de-clutter your space, with which you were once content.

Now there is an app that helps you de-clutter your social media too?

But if you too want to get organised on your social platform, then the app Tokimeki Unfollow is a tool which lets you figure out who to unfollow by asking you if their tweets “spark joy.” 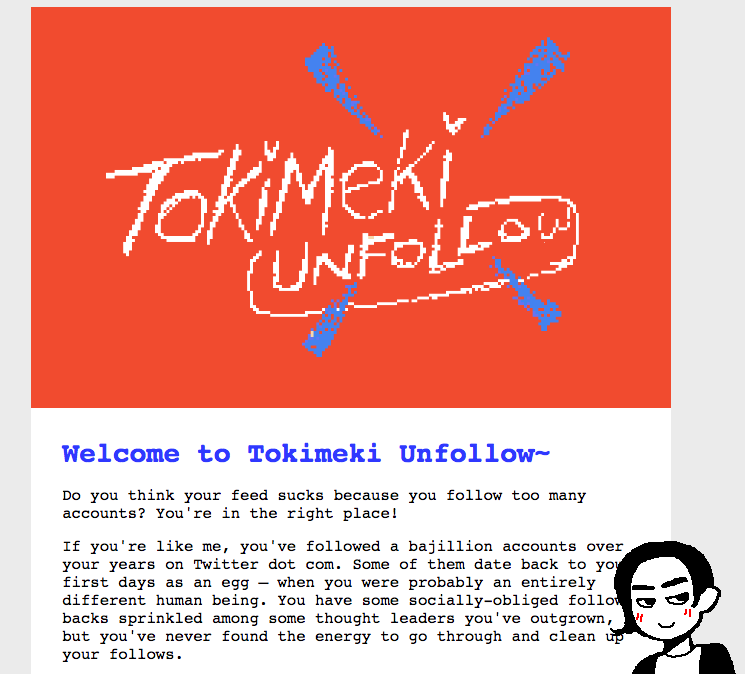 There are a few personalised options when you open the app; like sorting the accounts you’ve followed by chronology (Instagram take note) or if you want people’s bios to be visible.

You are then presented with a timeline of the people you follow (yes even those from your reckless following days in 2009) and have the choice of unfollowing them.  The app will ask you if their tweets spark joy or feel important to you. Personally, I think it is a great prompt to remind you how much engagement you have with the people you follow on Twitter.

Keeping it the Kondo way, users will be asked to thank those who they have unfollowed and let them know they enjoyed their tweets… How polite? Not sure how I would feel about receiving that notification.

If you’re an avid Twitter user, then you would have seen Twitter’s latest update with their “Sparkle button”. Users have the option to click it and the timeline will switch between Home (their algorithm) or Latest Tweets ( reverse chronological, what we really want).  If Twitter were to adopt a feature to clean your timeline or remind you of your most active users, it will certainly bring more of a community feel across the platform.

The web app was created by former Facebook product designer Julius Tarng, who told WIRED he made it after returning to Twitter after staying away for a year and noticed his timeline was filled with stuff about which he didn’t care.  But it makes sense. Why fill your timeline with things in which you no longer have an interest? I feel an app for Instagram is needed next. From a business perspective, this may just be a small 10-minute task that keeps your timeline filled with relevancy. Plus your social media manager or executive will not have to scroll past a political business tweet and maybe a random cat GIF in the space of 30 seconds. Community management now becomes fun again!