How will you say ‘I love you’ this year?

They say technology is ruining personal relationships, with a study recently published in the journal Psychology of Popular Media Culture reporting that 70 percent of its participants, “all of whom were married or cohabiting heterosexual women, said that smartphones were interfering with their relationships” (Tech Times 2014)

Further reports advise not to mix technology and dating. Although it may be a good tool to find a date through apps such as Tinder and OKCupid, once you meet your loved one, mobile phones could be the biggest buzzkill. Picking up your phone on your date on a Valentine’s Day date may even mean you will be forever cursed into spinster- or bachelorhood!

But once you are in a relationship, could the rules be reversed? In a recent study surveying 9,000 UK residents, LINE Corporation has discovered messaging apps are “actually improving the relationships of European users” (Adweek 2015) 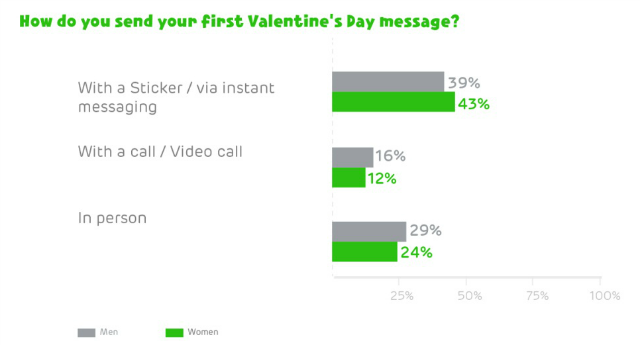 With Valentine Day’s looming, LINE is expecting many users to send their romantic messages on the app, with 72% of those surveyed said “they will send Valentine messages digitally” and in preparation to this they have even released new Dino stickers which will be available till May 2015.

Who said romance was dead?