#indyref 2014: the fight for Scotland on social

Little else has dominated UK news headlines in recent months than the impending Scottish referendum. Not satisfied by traditional media coverage, many have taken to social media to voice their beliefs. Individuals, as well as the Yes and No campaign brands themselves, have chosen social to raise awareness and support for their cause. So how much impact have their posts had to sway public opinion?

At the moment, and despite conflicting polls, the outcome still seems balanced on a knife edge. Even now (with just 1 day to go!) opinions remain divided and numbers continue to vary.

Social media, however, is rife with speculation, passionate posts and hot-headed replies. Thanks largely to its grassroots activist approach to the referendum, the Yes campaign has enjoyed widespread coverage in particular through both the #VoteYes and the #indyref hashtags. Additionally, they have created social content that is easily shared; designed to corroborate their views to new and existing supporters.

Don’t get me wrong, the No campaign has evangelised digital users with equal effort, but arguably with less planning for social. A quick dip into Radian6 to review top hashtags in the past 90 days verifies just that. Of 4,764,842 #indyref posts, 66,775 were #VoteYes and 10,657 were #VoteNo (although the #BetterTogether campaign garnered support with 14,531 mentions). 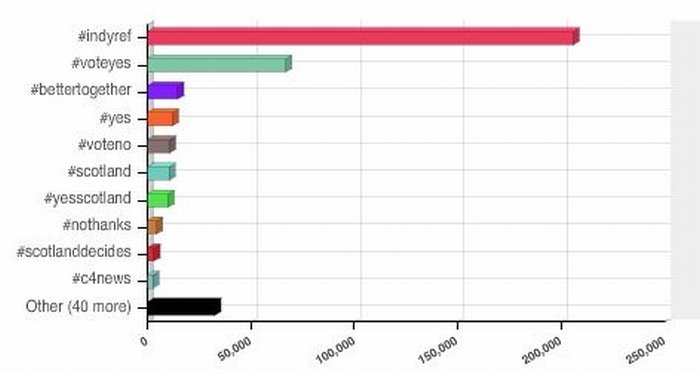 Some brands have even weighed in on the debate – only to suffer the consequences:

Quite a few people I spoke to over the weekend are now boycotting @asda after their comments on the Independence referendum. #VoteYes

The implication for brands could be massive, particularly in terms of their presence on social. People can be fickle, after all. People will like, retweet and follow the brands that they believe to best represent and support their own views. By equal measure, people will unfollow and stop engaging with those brands who go against the grain.

What can be done then? Some brands may be preparing a plan for dealing with a social media crisis even as you’re reading this – and kudos to them for thinking ahead. Others may tuck their tail between their legs and run to traditional advertising. But until the results of the vote are announced, it seems that the importance and value of social media as a vehicle for campaigning (and for managing or re-building a brand as the case may be!) is the only thing that either side can agree on.