Apps have revolutionised speed-reading through displaying single words in rapid succession. These apps are based on a method known as Rapid Serial Visual Presentation, or RSVP. It’s nothing new and has been documented in cognitive psychology since the early 1970s, but with the rise of mobile and apps, its popularity has rocketed.

When you read normally, your eyes jump (“saccade”) from word to word, usually at about 200-250 words per minute. With RSVP, there is no need for saccades because each word is displayed, one at a time, centred on the screen, for a fixed duration (Matthew J. Traxler 2011)

Don’t believe me? Try it for yourself

Honda has used this technique in a truly creative campaign, consisting of one TV advert and a 40-second, 30-second, and a 20-second ad. The text displayed in each ad got quicker in correlation to its duration, with the 20 second ad’s text displaying at a much faster rate than the 40 second ad. Sadly this campaign was stopped in the UK as it breached advertising regulations.

Coincidently, another East Asian car manufacturer Hyundai had previously also used this technique during a campaign promoting the Sonata Turbo. Hyundai teamed up with Spritz (a speed reading app) to produce a landing page that allowed customers to see how fast they could read the provided copy, prompting them to share their results via social. 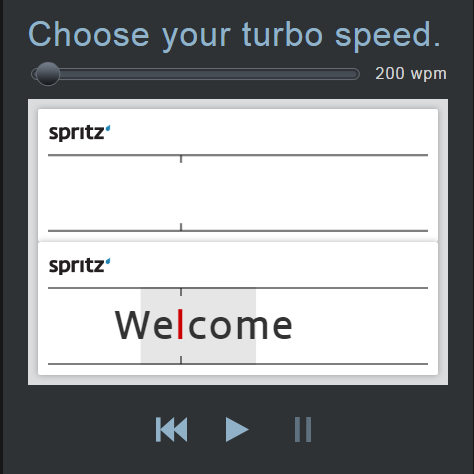 Having said all this, a study published back in April 2014 in Psychological Science suggests there is a downside to using this technique in advertising. The study claims that moving your eyes between words helps you better understand what you have read. Readers typically move their eyes in the direction that text is written. And around 10% – 15% of the time readers look back at words they have already read, according to previously published research. The new study suggests that comprehension, recall, and retention suffer when readers are prevented from looking back at what they have previously read. So should we just forget using speed-readers in marketing?

The simple answer is no. When Honda challenged viewers on TV to go onto YouTube to see how fast they could read, the results where staggering – the campaign gained over half a million views in the first two days.

When used in the right context this technique can prove to be effective, and with the average amount of time consumers staying tuned to ad videos being less 10 seconds (Clickz) the need to get to get your message across as quickly as possible is important.