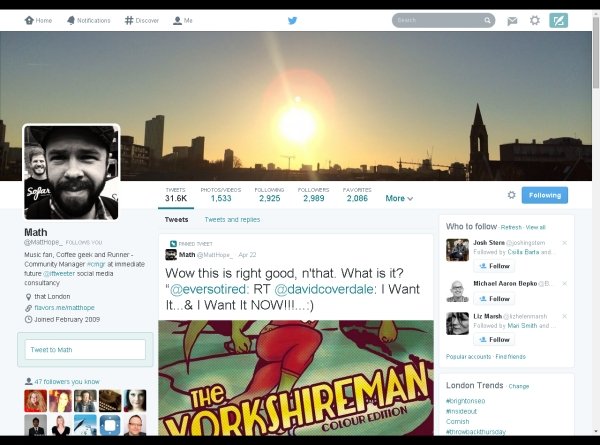 Twitter has finally launched a new profile layout design for all its users rolling out a long overdue makeover of its previously and somewhat stuffy browser based layout. The new design falls inline with Twitter mobile design updates and instantly shows a big focus on visual enhancement in enlarging the profile image display, presenting a wider header image and an enhancement of the Photo and Video feed. Are these tweaks valuable enough to push aside certain functionalities like Twitter lists? (now given less profile page space and less visual attention within the user interface).

1. Best Tweets: A display of your profile tweets that have received the most engagement. The tweets will have an enlarged font to stand out slightly from other tweets in your feed. How does this contribute to your profile? Will this simple design action help indicate to new followers your posting successes or simply contribute further engagement to posts that have already achieved? As you can see from my own profile, some of my more engaged tweets do not necessarily indicate a strong idea of my Twitter personality but they do show what my followers are interested in. So is this more a reflection of my kind of following or the kind of content I like to post? An interesting cross reference.

2. Pinned Tweet: Not dissimilar to a post level action on Facebook pages, Twitter users can now ‘Pin’ Tweets to the top of their profile page allowing the user to highlight their favourite Tweets to showcase as a fixed headline. A key Tweet that defines your profile personality and summarises your profile activity. Does this mean that Twitter are softening to some of the functions more commonly used within Facebook, including a soft leaning towards a layout design not dissimilar to Facebook?

3. Filtered Tweets: Diversifying further the customisation of search and follow feeds, users can now choose between a range of timeline options when checking out other user profiles. The options to view between stand alone Tweets, Tweets with rich media including photos/videos, or Tweets with responses and replies are all now available. A great extension to filtering through content search types that may typically vary between image driven engagement i.e. live events or more conversational engagement to include responses and replies.

The change now poses several questions around the platform and the responses of its users. Instant feedback has already likened the updated design to fall more inline with what we may find on Facebook but further opinion seems to indicate Twitter are challenging their potential demographic. Appealing to an audience keen on the ‘open platform’ functionality of Twitter but that still prefer Facebook’s media rich content display. Will we see a shift in Twitter audiences gaining a new demographic where Facebook seems to be losing? Or will we see a diversification of interactivity, combining a wealth of media rich conversational engagement that only the functionality of Twitter can provide?