Seven minutes to take back your WhatsApp messages

Let’s face it, at some point in our lives, we’ve all said something we’ve instantly regretted. In the days before social and messaging apps, the fallout might have been painful but the worst of it was usually over pretty quickly.  In the mobile-first world we live in now, a regretful text message could prolong the agony for hours – we’ve all sent a WhatsApp and sat waiting for the double ticks to turn blue whilst all the time berating ourselves for the words we typed.

Now, all of that might be over – last week WhatsApp announced a new feature that lets users delete messages within seven minutes of them being sent. SEVEN MINUTES. That’s more than enough time to have a change of heart and remove a message before someone’s read it.

The functionality is easy enough to use – highlight the message you want to delete, press the trash can icon, and as long as it’s less than seven minutes since you sent the message, you’ll be able to choose to delete it for everyone within the chat: 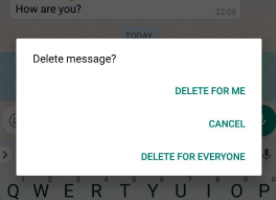 Once a message has been deleted it’ll be replaced by a message within the conversation letting people know you’ve deleted something:

Simple, right!? There are some important things to remember though:

I’m pretty sure I’ll be making full use of this feature, even if it’s just to delete messages with ridiculous typos in, but I’ve got one question for WhatsApp and that’s ‘why seven minutes?’ – it seems like a very odd choice of timeframe to pick. When you write a message, the regret is usually instant, and if it’s an important message you’re sending you’ll check it straight away for typos or autocorrect failures.