Now, there’s a question! The issue of one of three giants buying Twitter has started gaining some serious traction over the last few weeks. Those giants are, of course, Apple, Facebook and Google. Although there is a viable case for Apple to buy the flagging social network, it seems that they are still having trouble getting their heads around social media in general and, therefore, it seems unlikely. Facebook seem to have their sights set on other ventures, which I am pretty happy about, as the magic of Twitter could quite quickly be destroyed by ‘Zuckerberg’s ad machine.’

So, it would appear that Google is most likely and relevant to buy Twitter, and it has the most reason to do so – with a social media void to fill and Facebook to fend off. The acquisition has a lot of support from those online with The Next Web saying: “Google should buy it, support it and let it grow into the social presence that Google+ will never be.”

The possible acquisition has been covered by all the major news channels, covering market predictions, expected growth and every speculation in between, so I am going to simply cover off the main reasons why I think both Google and Twitter need the acquisition to happen, and let you to come to your own conclusions:

It is no shock to anyone that Google has a desire to fulfil the social media success that has continually eluded them. Failed attempts from Orkut, Reader, Google Wave, Google Buzz, and now Google+ leaves us with the thought that surely it has to be easier for them to buy an existing social network. They could just ignore social and focus on search, maps, driverless cars and virtual reality. But the threat from Facebook is just too great.

Facebook has already starting to dominate video and push Youtube to the sidelines. Zuckerberg has highlighted search as a key focus for the company’s strategy and the app war is being well and truly tied up by the social network – consistently taking the crown for downloads and engagement across its impressive estate of Messenger, WhatsApp and Instagram. Perhaps, more importantly, Facebook’s growth is exceeding Google at quite a rate, with revenue growth at Facebook at +58.36% year-on-year in 2014, versus +19% year-on-year at Google. You could argue that this is not a massive problem when Google’s yearly revenue exceeds Facebook’s by over $50 billion. However, the increasing market share of Facebook means that it is governing attention online and, when combined with its strategic direction for growth, is something that should not be ignored.

Twitter would bring Google considerably more data. Although Twitter’s firehose is already shared with Google, full integration of the two channels would present a number of advances in targeting, access to social data, and huge strides for ad offerings from both Google and Twitter. The increased data would also dramatically impact search results, with tweets gaining more data and real-time data from Twitter feeding search results. The impact on news would be huge, with information coming straight from the horse’s mouth – the opportunities in this area are endless.

It is no secret that Twitter are failing to take on new users, and their attempts for serious acquisition have been flawed time and time again, even firing their previous CEO over this very issue. So Google’s purchase would certainly relieve some of this pressure, allowing Twitter to focus on what it does best and retain the old users – while the Google family works on solidifying the business proposition and growth plan.

If all of the above aren’t convincing enough, take a look at this revenue chart for Twitter and tell me if you think they need to be acquired: 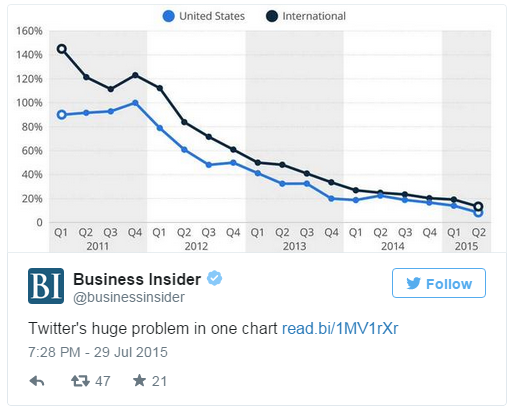 So what do you think, should Google buy Twitter?