#Trashtag – the hashtag for greater good

From the Mannequin Challenge, in which groups of people remained motionless in videos, to the recent Microwave Challenge, in which people slowly turn while sat on the floor, social media challenges seem to exist purely to inspire hashtags and a bit of fun. After years of ridiculous challenges, (remember “planking”?!) there’s finally one that’s worth getting behind and giving exposure.

You may have noticed your social feeds filling up with selfies of people with piles of litter, usually with shots before and after cleaning it all up.

It’s the #Trashtag Challenge, the latest campaign to take social by storm. And undoubtedly, it’s a positive one. It’s an anti-litter awareness initiative that’s encouraging a worldwide litter clean-up. Participants are taking vocal action against environmental pollution by cleaning up and spreading the word on their social accounts.

However, the tag was introduced by the media brand Teton Gravity Research way back in September 2015. So how come it’s only gaining attention now? Well, it might all be down to one Reddit user who shared this post earlier this month.

A search for Twitter or Instagram now shows countless selfies of people holding up bags of litter. Streets and beaches in Mexico, Nepal, Nigeria and the US have apparently already been cleared of carelessly disposed waste through this campaign. The social media storm even seems to be motivating teenagers to pick up litter after school. Crazy right? Crazy good! 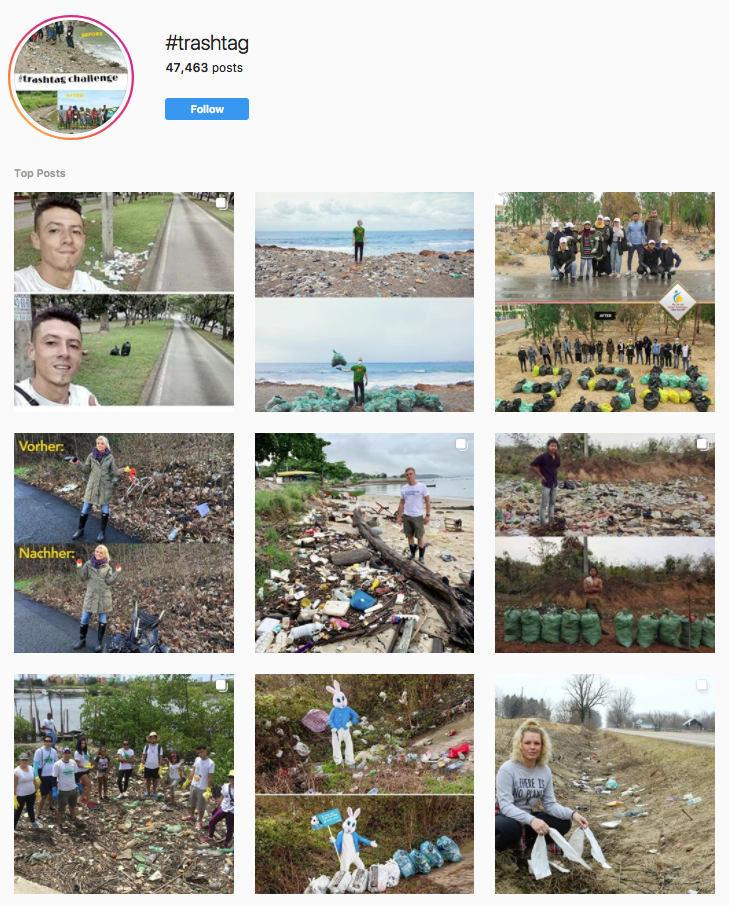 The latest trend echoes the ‘plogging’ movement, which last year saw thousands of joggers picking up litter. Plogging – which combines the word jogging with the Swedish word “plocka,” to pick – saw joggers arm themselves with rubbish bags.

Groups dedicated to plogging appeared all around the world, with joggers being reported seen stooping for litter from Britain and Germany to India and Malaysia

As #trashtag takes off, you may soon see much cleaner beaches, parks, or even sidewalks. And if you have some spare time, feel free to join in on this worthwhile trend to help make our little planet a cleaner place!