Last week Twitter announced objective based ads. A new way for those using promoted tweets service or Twitter ads’ to set up new campaigns. The new feature allows marketers to create tweets based on their key function and only pay when that function occurs. So if you were trying to attract people to your website, you only pay per web / URL click, if you are trying to popularise your app, you would only pay when people install your app. These single objectives are determined when the tweet or campaign is being created meaning you don’t have to pay for the more general engagements like retweets or favourites.

Does this mean twitter are giving these engagements away for free? No, not necessarily, through narrowing the objective of the ad in question, you are effectively narrowing your target audience and essentially helping twitter and your ad target more accurately. This in turn is enhancing the value of twitter ads to not only the marketer but also to the audience. This could spell a period where we may actively see more promoted tweets, but if they are increasingly on-point then this shouldn’t be such an annoying ordeal for the viewer. In many ways with more focused targeting audiences should see more of the products and services that would interest them and naturally engage when ready.

The new service breaks down the normal tweet structure from a simple use of a 140 character block, to a separate URL, a ‘call to action’ (CTA) and a new image dimension. The block text is reduced by only 10 characters leaving 130 to play with without having to consider your image or URL link. The separation helps determine which link will be paid for and also makes sure the marketer is including the right content combination to drive the desired actions.

Research has shown the kind of changes in engagement seen with variations on content including the number of characters, hashtags and handles. Twitter Ads provide this insightful infographic below to help you design your next promoted tweet. 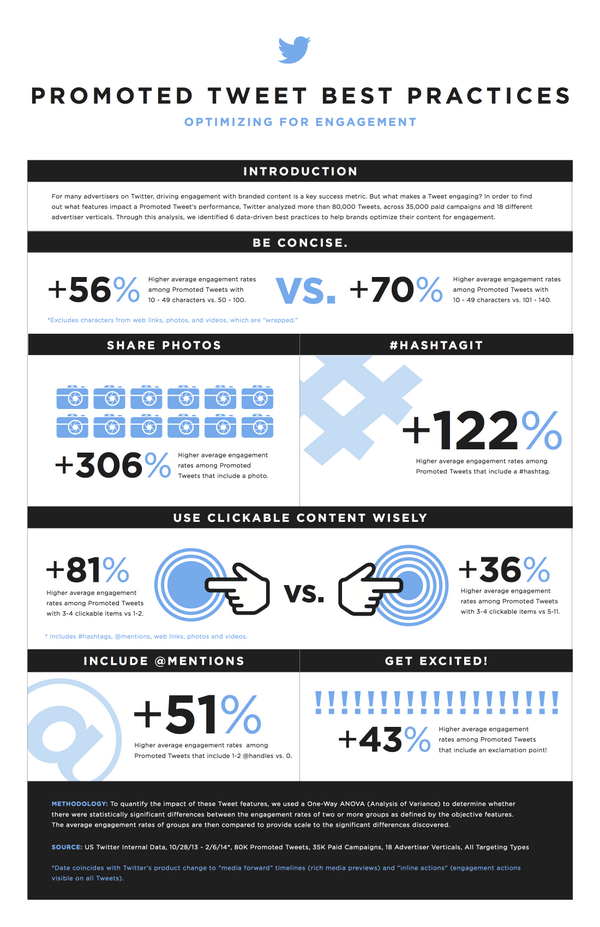 August 11, 2014
Sharing is caring!Twitter moves ever closer to becoming a retail channel