Twitter made some changes to paid…and they are pretty cool

This week has seen Twitter get all Facebook-y (yes that is a word) whilst making some nice strides with their paid advertising engine. There are three significant changes that have all gone live this week; Universal code, new custom audiences and an ‘objective-based’ interface – making the platform simpler to use, more effective and more powerful. Let’s take a look:

One word…remarketing! It is kind of a big deal – the power to target those that have shown an interest in your website, products or services already enable brands to achieve a great level of engagement. Well, now Twitter has joined the party with its Universal code, which allows you to make this whole process far easier by tracking activity and using web data more effectively.

So it is safe to say that retargeting on Twitter just got a whole lot better.

The fun doesn’t stop there though – oh no. The ability to create custom audiences from the data spat out by this Universal code is where it gets really powerful. You can now build up to 200 audiences from a single code, segmenting and retargeting those people who looked at ‘cars’ and those that looked at ‘motorbikes’, for instance. This was previously far more limited with Twitter’s single-event tag, which limited you to 25 audiences.

Following in Facebook’s footsteps, Twitter now asks you to pick the objective of your ad right up front before you set it up. 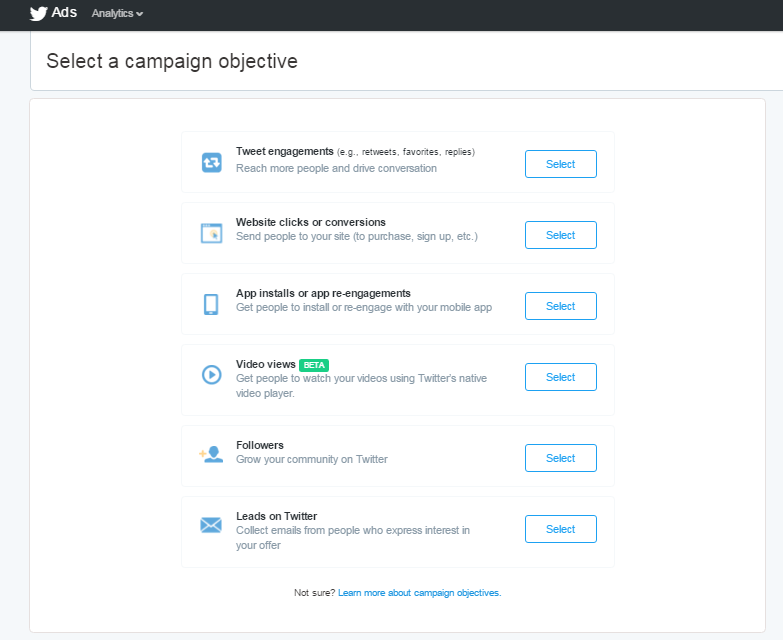 You have the option to pick from tweet engagements, website clicks/conversions, app installs, video views, followers and leads on Twitter. Each of the options are pretty self-explanatory and lay out a clear purpose for ads before you get creating. Whilst this is not ground breaking and has existed on Facebook for quite some time – it does make the whole process much clearer and gives those that are new to Twitter paid far greater visibility over their objectives.

So, to summarise: Twitter basically just got all the features that Facebook already has. However, it is a great step in the right direction and is, hopefully, a sign of more exciting things to come!