Twitter is rolling out new settings that will allow all users to control who can reply to Tweets. It’s a feature they tested earlier in the year, but now we’ll all be able to start limiting who replies to our content. So, what does this actually mean? We see two options:

By using Twitter’s new settings, users will be able to choose out of three options when posting a Tweet: 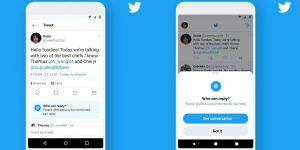 If 2 and 3 are selected, users will still be able to like or retweet the Tweet, the reply button will simply be greyed out.

One outcome will be cleaner feeds. This will be particularly useful for hosting panels or interviews – Twitter is already working on a way to invite people into conversations. Where before, users that are either interested in the content or simply would like to voice their own opinion, negative or positive, would flood these feeds and interviews in panel would be almost impossible save for an open Q&A. Now, the organiser will be able to directly choose who can reply or engage with the Tweet, all while everyone on Twitter can still see Tweets and react to them. Users can even start their own conversations via retweets without disrupting the original chain.

One of the main draws of Twitter is open discussion, loosely organised via hashtags and by the people you follow. There is a concern that limiting who can comment on your posts can hinder the discourse happening on Twitter.

Yet, Twitter sees this almost as a way of further organising different viewpoints. During testing, they saw users branch off from limited discussions and start their own, highlighting their differing perspectives. It will be interesting to see whether Twitter will eventually implement features that better highlight these branching paths and make them easier to follow, as at the moment users will have to search by who retweeted the content, which can be painful.

The important thing is that user feedback has been a feeling of increased safety. Spamming and trolling is a large part of the internet, where anonymity is king. Many people have been at the receiving end of unjust personal attacks and have deleted their accounts. Limiting who can reply to Tweets can give people the confidence needed to say things they might otherwise feel unsafe putting out there, or to stay on the platform discussing ideas with their followers. This will of course have negative effects as well, but between simply deleting your entire Twitter account or staying on the platform, this option seems to be a healthier middle ground.