Twitter’s heart – like it, or love it? (There’s no other option)

Earlier this month, Twitter changed its popular Favourite function from that little yellow star to a red heart, at the same time renaming it to Like. As we know, Twitter users generally do not initially like change, but embrace it in the end. But this particular change has far deeper implications than just the superficial. 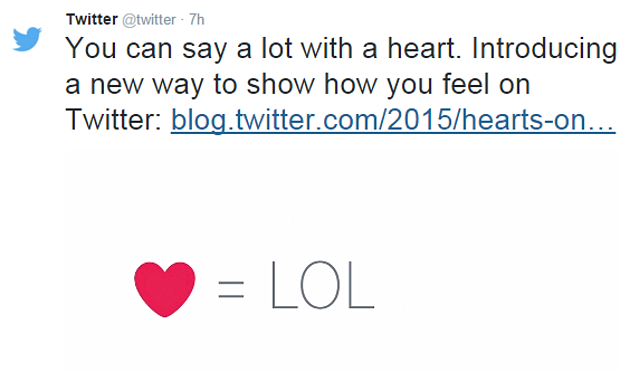 The Favourite function – much used by me and my entire network – had (in my opinion) three major uses:

Anything I would have said I liked or even loved was rewarded with a retweet – the ultimate show of appreciation is to share the content with your network.

You may agree or disagree with the above (let me know in the comments below). Either way, by moving away from a yellow star, Twitter has not only changed the functionality but the emotional response to other users’ content.

For instance, in the past, a newspaper might have sent a tweet with a link to an article about the immigration crisis in the Mediterranean with a harrowing image of a child having drowned.

Previously, it would have got maybe a few hundred (or thousand) favourites – an acknowledgement or thanks from the audience for bringing the story and the horrific aftermath to their attention.

Now, however, the only option users have is to click a red heart. This is a completely different emotional response to the content – they may not like or (I imagine) even love the content, but that is what is implied with a heart.

I can see why Twitter felt they needed to make a change – Instagram has hearts, as does Periscope, and Facebook obviously has its thumbs up Like. Consumers understand hearts, and will hand them out more freely than they will gold stars. But to use a heart to restrict sentiment to entirely positive is not a good thing in anyone’s book. Also, a heart (and a Like) are stereotypically a more feminine response, and it’ll be interesting to see demographic data as to who and how people are using them.

Is this one step towards a multi-functional ‘like’ where everything above has its own button? Or is this a step to the dumbing down of Twitter (to the same level as Facebook) where every response has to be an Emoji?

So what are the alternatives? A tick (or checkmark if you’re outside the UK)? A flag? A pin? All of these limit the sentiment of what you might be trying to convey.

How about a thumbs up? Nope, that’s already taken.

A gold star should do it…