What can Cecil the Lion’s story teach us about social behaviour?

The social media storm around Cecil the Lion is undeniable – with over 800k mentions of this name online and 444k uses of the hashtag #CecilTheLion.

For those that don’t know the story goes something like this:

Cecil is a famous lion from Zimbabwe that has been tracked for years by Oxford University scientists for the continued study and protection of the African wildlife populations. He is a bit of a Youtube star and notorious for being something of a friendly giant, with many a tourist taking photos and videos of him over the years. Walter Palmer, a dentist from Minnesota, United States, paid $50,000 to hunt and kill a lion. Cecil was drawn out of the national park by attaching a carcass to the back of a jeep, as it is illegal to kill animals in the park. Walter’s two guides then shone a spotlight on Cecil and Walter shot him with a bow and arrow, but Cecil didn’t die, instead he walked around wounded and bleeding for 40 hours, until they finally caught up with, shot him, skinned him, beheaded him and posed for pictures. Unfortunately for Walter, the scientists at Oxford had a tracking device and managed to find Cecil’s decapitated body and tracked down the hunter.

When the world found out about this controversial and violent act there was uproar and I have, yet again, seen social media play a fundamental role in providing a platform for a unified voice against injustice. In a world where bigotry, racism and prejudice still seem to seep through cracks of society (cite Hulk Hogan this week alone) this type of reaction re-installs my faith in humanity, that when we see injustice and bullying behaviour of this nature we will stand together – against it.

There are a number of reflections on modern culture and behaviour that come to the surface over this issue:

The power of celebrity

Some of the world’s biggest and most influential names have come out in force to show their support for the cause including Jimmy Kimmel, Ricky Gervais, Cara Delevingne and Piers Morgan to name just a few. The impact of the online network of interested parties has netted over 3.6 billion impressions of Cecil’s story.

The power, influence and reach that news networks and celebrities have and the ease of access to that information through social media allows for huge and dramatic actions. Mia Farrow has come under scrutiny after posting Walter Palmer’s address online – with people accusing her of inciting a mob. 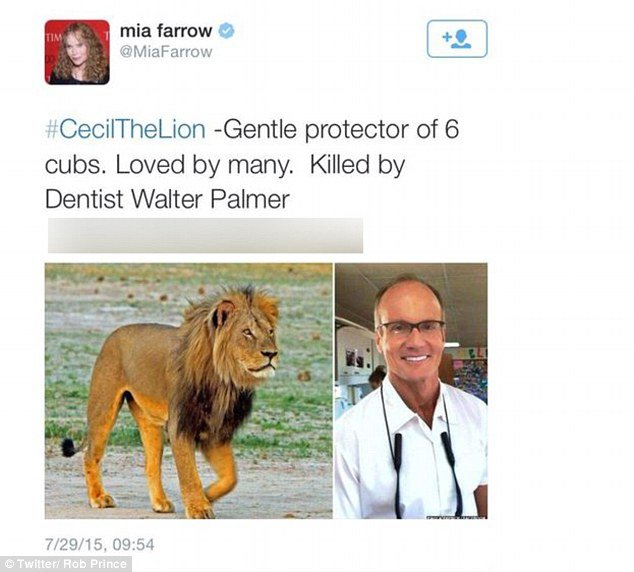 You can be anything to anyone under the guise of social media. Many social channels provide the perfect cover to falsify identities, create satire or even intimidate and abuse. In the case of Cecil the Lion, it would appear that someone has created a fake account for the River Bluff Dental surgery where Walter Palmer works. Tweeting exclusively about lions and weird humorous messages related to the incident that, if genuine, are insensitive but when identified as trolling are a quite clever and sinister destruction of the business’s credibility.

The other side of celebrity is the type of fame that Walter Palmer is going through – with over 164k mentions of his name in the hashtag #WalterPalmer – and attracting A LOT of the wrong kind of attention. His rise to the most hated man in the world has taken only a number of days, which is pretty remarkable – Katie Hopkins and others spent years honing this skill and must be gutted. On a serious note though, at the very least he has destroyed his business (they have already closed the surgery), his professional reputation, and made life extremely awkward and difficult for himself should he choose to live anywhere other than Antarctica or the desert, as his picture is plastered all over the web and national press worldwide. On the more severe end of the scale, he is wanted by Zimbabwean police, could possibly be prosecuted in the USA and his personal safety is at risk (he has already gone to ground, releasing only one statement to the press in writing).

The worst thing that could happen now is that some equal nut on the animal lover side takes it too far and takes the law into their own hands. The online-offline transition has already begun as there are mobs gathered outside his place of work and known addresses 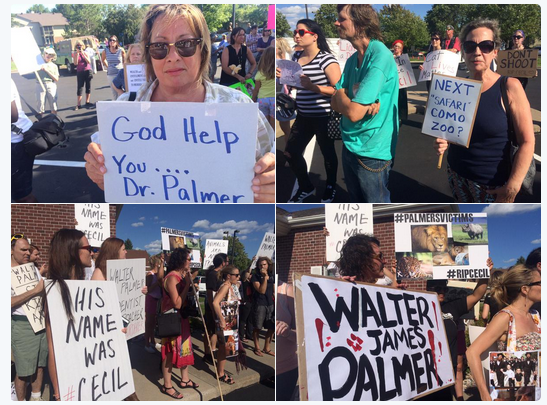 The rise in awareness for animal rights and the support for the scientists and their work should not be undermined by a foolish retaliation, but rather we should leverage public support to ensure that Walter Palmer’s actions are dealt with in the legal way through international law and the cooperation of two diverse nations.

A point raised by Jimmy Kimmel in a video he made talking about the issue suggests that we should turn a negative into a positive by supporting the scientists behind the research and urges us to visit and support their efforts at https://www.wildcru.org/

Social media has provided enormous support for charity campaigns – the #nomakeupselfie clocked up a whopping £8million in 6 days and the Ice Bucket Challenge raised over $100million for hundreds of charities – so I believe the best outcome of this tragic act could be increased support and funding for a good cause.

I will leave you with the wise and humorous review of the situation from Jimmy Kimmel: