What is the future of the social media department?

As we move through social media maturity, with some organizations already focusing on optimizing activity and performance based models, the question is – when does social media just become part of everything else? And what is the future of the social media department or even team? 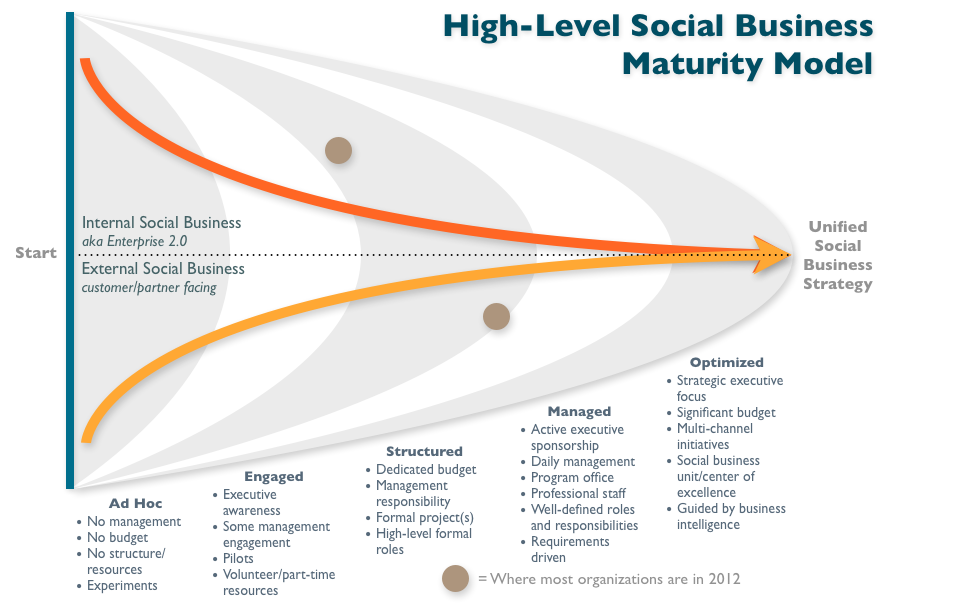 Social media touches multiple departments, it’s leaky. When we talk about social media now, we aren’t really just talking about Facebook, Twitter or the platforms themselves, we are talking about a social way of behaving. The term Social Business has evolved from this overarching principle. Essentially we are talking about a seismic shift in customer behaviour fueling the need, on the flip side, for radical change internally inside organisations.

Let’s give a few moments thought to the impact of social media across multiple departments:

Marketing – Huge tangible impact. Social has presented the opportunity to create authentic one on one conversations with customers, and collaborate like never before. It has also presented an opportunity to reach and connect at speed and scale. Because of the “inside out nature”, it has meant that some traditional techniques cannot be applied in social. For example, those from an advertising background would be used to communicating with their audience in a very different way (one way conversation, less authentic, more them and us, list goes on…). This has meant social media specialisms have formed internally; often (initially) isolated as the “social guy”, the “social girl” or “the social team”. The degree in which social is integrated with marketing activity still varies greatly according to each organisation. Indeed, where social sits within the business (at this stage there is a feeling it needs to sit somewhere) – but this varies as well from Marketing to Brand, Ecommerce to Comms etc.

PR – Take a look at the “PR Agency” of today – very few would not lay claim to managing social media channels or using social media to connect with and engage influencers. For brands internally, the biggest impact is the lack of control. Carefully crafted press releases, engagements with journalists and influencers can be blown of the water in an instant through social media exposure. Like the communications department below, the speed and scale of social media presents big risks as well as opportunities. From my experience that has resulted in PR departments embracing whilst trying desperately to  control social activity across the business, using in a very narrow fashion, or equally treading incredibly carefully and cautiously for fear of creating a media storm (often in a teacup).

Communications – Speed, scale, risk and reward. Similar to PR. Although the Communications department are more concerned with the risks associated with employees’ social media activity. Our Social Media Policy workbook from last year, was our most downloaded resource and we continue to speak to many communications departments helping the navigate the opportunity and risk minefield of social media. Ultimately though, I am pleased to report, that most are focusing on how they can empower their colleagues whilst still protecting/mitigating risk for the brand.

Customer Service – Again, huge impact. Smartphones and social media have warranted that brands respond to customers where they are, not through channels they dictate. Customer expectations have heightened, expecting a speedy response. And they are certainly not afraid to share their opinions via social media, making negative customer feedback more visible and more damaging for brand reputation and cyclical impact on the customer journey. Customer Service teams are now embracing social and integrating into their workflows as per other key channels such as phone, email and livechat. I could go on, I won’t, you get the point…

Research & Development – The rich customer feedback, often unsolicited, via social media provides brands’ research and development department insight they would have to fight for through large survey exercises in the past.  But with the right community, brands’ can also solicit feedback and collaborate customers’ to develop better products and services, building brand loyalty in the process. Social data is starting to be embraced to lesser or larger degrees in these departments either leveraging data produced in other departments or taking ownership themselves.

But there are some serious signs of change that we are noticing as we enter into 2015: 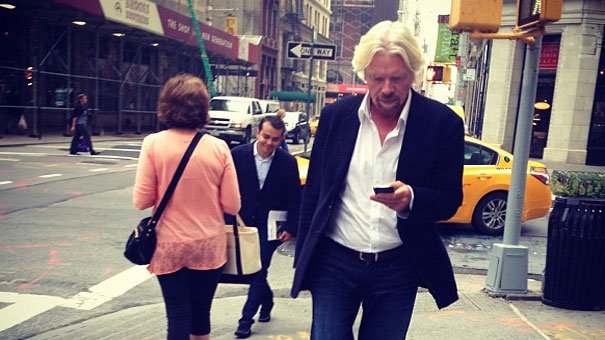 1. Coming from the top – Often quoted when we enter into the “Social CEO” conversations but Richard Branson himself wrote this post entitled “why aren’t more business leaders online?” back in 2012, and we know the world has moved on since then. More and more business leaders are gaining traction on social media. From a recent report by WeberShandwick, CEOs themselves are projecting a 50% increase in participation in the next 5 years. And their participation as individuals must indicate how important they regard social media in years to come, and the emphasis they do or will place on social over the next 5 years…

2. Stepping up training – we at IF have seen a dramatic increase in requests for bespoke training programmes – and not just from marketing teams. The requests are coming thick and fast as part of sales enablement programmes in B2B, crisis communication and customer service teams. As much of this “training” is about internal buy-in, often driven by a single department trying to lead the way. But what is clear is that silos are being broken down, and multiple departments are embracing and collaborating.

3. Re-organisation of departments – again, client examples but almost every one of our core clients including the likes of Post Office, Thomson Reuters and IBM have departmental shake-ups which have seen the role of social expand and/or move departments. There are now currently 3500 Social Media Managers, Directors or Strategists by title in the UK alone (LinkedIn data) but almost twice as many Marketing Managers or Marketing Directors with “social media skills” – my point is that the title does not necessarily matter but departments are looking to bring social skills into their teams. Another example area would be with “content” roles which have accelerated in popularity as a result of the way social media and the smartphone have given us access to content, and the speed in which we consume it. Take a look at Accenture and see how they talk about “digital transformation”. I know first hand that re-orging these departments is keeping the likes of them very busy…

4. Multi-departmental ownership of social – linked to the training point above, and on recognising the need to up skill in the area, departments outside of what would have originally been a marketing function, are taking ownership of social media. This biggest evidence of this is in the customer service space where brands have fully embraced the importance providing an exceptional customer experience, visibly so in social media.

5. Transparency and collaboration – the always on conversation which happens whether your organisation is taking part or not bit… Well, the best brands are truly opening gearing up for a two way conversation with their customers. Social media has been the catalyst, but this communication it is not limited to social media channels. With this approach comes a need for transparency, there is need for this 2 way conversation to be built on a foundation of trust. GiffGaff and other such organisations who open their whole organisation up, entrusting their customers with customer service, product development and rewarding their input.

A long way to go…

There is a long way to go before we have a seamless integrated or unified approach. Call this social business if you want, link it back to social media even, but breaking down these silos takes time, people, process, the right technology and more time…

We aren’t there yet. Some haven’t even started…

90% of CEOs say they would use social more “if it were helpful to their business”. Clearly some C-Suite executives do not value social media or simply cannot see the ROI. It is the next wave of executives who will have digital, mobile, social etc. but into their very psyche. They are sweeping in, and some are just plain embracing it. But these changes come from the top…

So when are we going to see the disbanding of the social media department, maybe even the term “social media” as we know it…?
2025 minimum! God I really don’t know, a very long time! We are talking about a seismic shift. Huge internal change. Generational change. Change in culture business culture and internal culture. Social will still exist but not as we know it, it will just be common place.

As for the social media department, and the future of it?! Well I personally am not sure the solution is to have a dedicated department in the first place…