Balancing multiple customer segments in social media, and how not to be an idiot

Nearly one in two people in the UK will get cancer. But, as we learned from Amanda Neylon, Macmillan Cancer Support’s Head of Digital at the Social Speakeasy, 38% will not die from the disease. Macmillan exist to improve the lives of everyone living with cancer. Engaging and inspiring others is what Amanda’s team – a team of over 50 people! – do every day through social media.

‘Inspiring others’ downplays the magnitude of what the charity is doing though, since they are engaging an audience of 19 million! That’s quite a crowd. And 17 million of that figure are the family and friends of cancer sufferers, so with their help Macmillan drums up support in 5 main ways: by giving money, raising money, campaigning for change, sharing experiences and volunteering. In order to drive support and action for cancer patients, however, the charity has had to really get to know and understand their audiences. They need to know their get from their give: 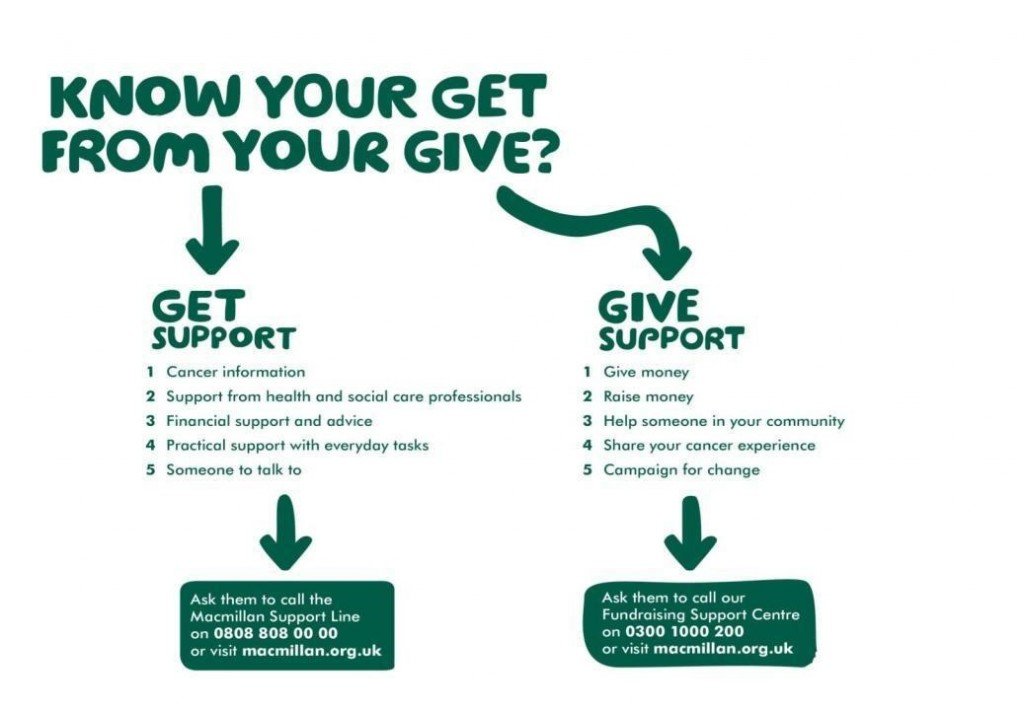 Macmillan discerned the difference between the people coming to them, and consequently the organisation now has a commitment to deliver the appropriate ‘get support’ and ‘give support’ messages in all of their communications. They also have a set of creative principles which guide their actions and, crucially, the tone of voice for their social communications. After all, someone who has just been diagnosed is not going to want to hear the same message as someone who has just surpassed their fundraising goal…

Give support and get support on social

How can one organisation handle so many audiences? There’s a fine balance between give support and get support stories, and because of that there are multiple profiles. Beyond their main social channels, which speak to everyone, there are profiles targeted at fundraisers, local profiles, and even profiles dedicated to specific topics. 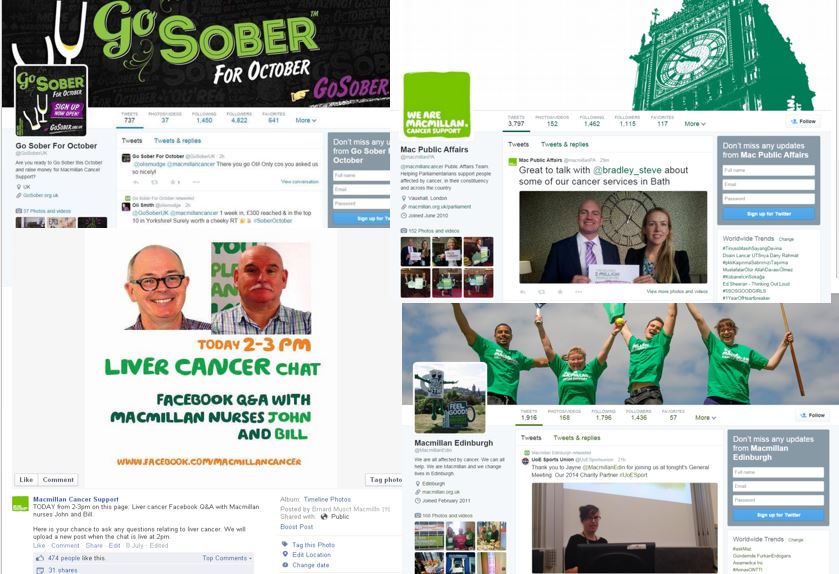 Having several profiles to manage does mean that there is a real need to share the right content on the right channel for the right audience. And in particular when it comes to having serious cancer support conversations – which, clearly, Macmillan do need to do every now and then!

Because of this, Macmillan nurses are an important part of the organisation’s social presence. With live Facebook chats and Twitter Q&A events, patients and their families can speak with qualified nurses or just watch the discussions unfold on their feeds. And sometimes, it’s the unplanned moments that can be the best.

Take Bellann’s story for instance. Bellann was facing her first day of chemo and tweeted Macmillan saying it would be more fun if someone would provide a juggler or tell her a joke. So, not having any circus acts on hand, Macmillan tweeted a joke and asked their Twitter followers to join in. Within minutes, tweets began flowing in with the hashtag #dadjokes. As Amanda said on the night, this wasn’t about cancer content. It was about the organisation enabling peer to peer support and encouraging social conversations. Something that is also seen offline in the ‘Not Alone’ campaign which we’re sure you’re aware of.

Here's a joke for you @bblace @SimonBurford. What kind of dog does a magician have? … A labracadabrador! (*Bows*. We're here all week.)

The charity has a lot to say, but in order to really get people to engage with them, Macmillan needs to tell stories. They use social to share stories from real people. Part of that is identifying the best way to tell the story; for instance, in the wake of the #nomakeupselfie hashtag that trended on social earlier this year, Macmillan found that diagrams were the preferred way to receive and share content.

With such a large audience, Macmillan are not short of stories either. As well as creating their own content and providing platforms for others to share theirs, they curate what else is out there to inspire their followers. Apparently the community regularly engages with this type of content.

Amanda is a staunch believer in the need to be a bit brave to make the most of opportunities on social media. Something that past Social Speakeasy speakers have also said. So, being brave, Macmillan began to create new content around events and news that were already trending online, and reaped the rewards! 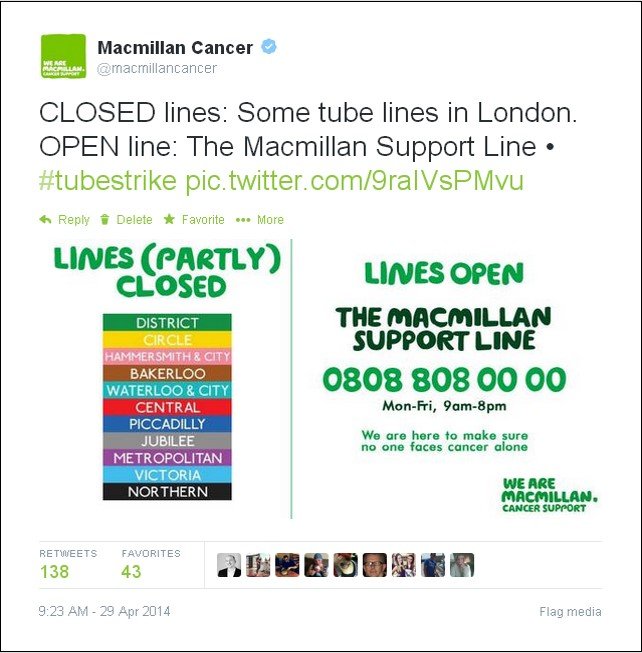 Still, they couldn’t do this without support. An important influence in Macmillan being bold enough to try new things comes from their senior management, who are advocates for their social media activity. In fact, although there are 3 dedicated social specialists in-house, the whole organisation is trained on social best practice and there are hundreds of employees across departments working towards social media objectives!

This is the ideal situation; when the Social Media Policy Workbook (ideal for planning against a social crisis) was published, IF’s CEO Katy Howell was quoted as saying “Social media is leaky. It’s everywhere! Everyone is connected. Not just your marketing department. But your employees, your shareholders, your suppliers and partners too…” So for us it’s great to learn more of an organisation actively educating staff and establishing company best practice in social media!

What’s even more impressive is So Social. Macmillan’s regular round up of what’s happening on their social media platforms, which is shared across the organisation. Not only does it keep everyone up to date with their work of engaging audiences but it shares what has been happening across the wider digital space and handy how-to tips. An excellent tool to create more company advocates – and to keep everyone appraised when things go wrong…

Can an organisation hijack a hashtag? An interesting question really because, as Amanda pointed out, who owns a hashtag? Unfortunately commandeering the hashtag for their own benefit is what Macmillan was accused of earlier this year when videos pledging donations to America’s ALS charities began trending on social media.

At the time, Macmillan Cancer Support was also encouraging fundraisers to perform the #IceBucketChallenge in the UK. And with great success in spite of the negative sentiment… When the campaign peaked in August, on Twitter, Macmillan received 2.5 million impressions, compared to 1.6 million average for the previous 3 months (56% increase). They also received 59,000 interactions with their tweets, compared to 22,500 average interactions for the previous 3 months (160% increase).

But by far the most important figure to be aware of is that the charity raised £4.6 million! A terrific amount to be donated for any important cause, no matter the charity that benefits.

Don’t be an idiot

Still, none of these impressive figures would have been recorded without having tracking in place to properly measure Macmillan’s social activity. Amanda is a big believer in measuring and monitoring the charity’s online campaigns. She candidly pointed out that there is a degree of trial and error involved when it comes to finding the right metrics for your organisation. And sometimes you even need to make sure that you’re measuring the right organisation; Amanda said that if Macmillan publishers were to rebrand, it would make her life a lot easier when measuring social conversations!

But that’s all part of the learning experience. Because at Macmillan, you can make mistakes, as long as they are new ones! So the final piece of advice shared (and one that became quite a talking point at the event as well as on Twitter) was the company’s unofficial mantra, and this is something that all marketers should bear in mind… Quite simply, don’t be an idiot.

This November we will be joined by Tania Seif, Head of Social Marketing at Coral. For details or to attend, please visit our Events